On September 16, New Mexicans were met with a dichotomy of messages.  In Rio Rancho, Donald Trump rallied his base on another campaign stop, took credit for New Mexico’s oil and gas revenue, vowed to turn NM red in 2020,  and continued his message of division based on race. Hundreds of protesters against his message stepped bravely into an unpredictable environment just feet from the rally. Threats from the right had already been launched against some of our most beloved local activists throughout the previous week.

In Albuquerque, hundreds gathered at a rally for peace called “New Mexico for All” to promote a message of love and inclusion.  The rally at Tiguex Park featured Mayor Tim Keller, NM Secretary of State Maggie Toulouse Oliver, and U.S. Representatives Deb Haaland and Ben Ray Lujan who carried the Democratic message of Unity.  The rally also featured some powerful voices representing New Mexico’s rich cultural diversity displayed in spoken word and in music.

One of those artists, Mercedez Holtry, an award winning New Mexican poet and author of the book My Blood is Beautiful, recited a letter to Trump which challenged his treatment of indigenous people and Latino heritage.  See below for excerpts from her poem.

Republicans, we accept the challenge.  And we will win. The hearts and minds of New Mexico Democrats and filled with love and unity – a force much stronger than hate and division. 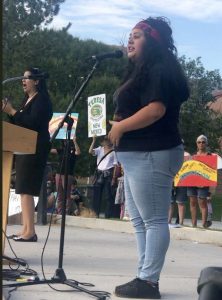 Here are some excerpts from the poem:

So you call the Mexican people drug dealers, rapists, and criminals and the media loses its shit.

Say you want to build a wall, want to enhance the border, and make Mexico pay for it because your business skills are just that good.  Your campaign slogan, ‘Let’s make America Great Again,’ with the unsaid words….’by kicking out all of the brown people,’ disguised and attached to the end of that statement, aka ‘Let’s keep America American. Let’s keep America white. Let’s keep America inclusive by outcasting people who were here before you.’

What I want to know is who the hell taught you history, Donald? Because it seems as if you forgot that the Southwest border, the frontera, the soil I soaked my sweat in, the land I call home once belonged to Aztecas, Mochica Warriors, indigenous peoples who were then enslaved, raped and murdered by white men who kind of look like you.