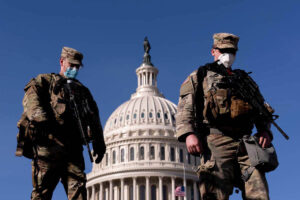 Scenes from the U.S. Capitol:
Then and Now

On January 6, the U.S. Capitol in Washington, D.C. was attacked. I know I speak for many when I say I have been heartbroken at the scenes that have been replayed on a continuous loop on television showing unmasked thugs breaking windows, stealing items, desecrating sacred symbols of our democracy, waving confederate flags, and beating police officers (one to death) in their Trump-fueled efforts to stage a coup on our country and violate one of three branches of government – the U.S. Congress.

I have fond memories of working in the U.S. Senate on Capitol Hill as a staff member from 1988-1991. I came to Washington to work in the press office for then U.S. Senator Jeff Bingaman – a principled man with unparalleled ethics and compassion for New Mexicans, especially those of us who worked for him in Washington and in New Mexico. I was so proud to be a part of the institution that I had so much respect for and work for a legislator who was one of the most decent human beings I have ever met. Any time I introduced him as “Senator Bingaman,” he would say, “please call me Jeff.” There are many of us Bingaman alumni who remain active in the Democratic party and who work hard to help carry on the values and principles he modeled. He is a true Statesman if there ever was one.

When I arrived in “D.C.” – as those of us who lived there called it – bipartisanship was actually in practice, even though the Democratic Congress would often butt heads with the Republican Administration. Still, important pieces of legislation were passed. The Americans With Disabilities Act was signed into law by George H. Bush in 1990, a huge victory for a significant population that continues to be protected to this day.

One of my most vivid memories about that historical bill occurred on the day the Senate voted to pass the bill. Prior to its passage, I watched Senator Jesse Helms, a Republican from North Carolina, argue his amendment to limit the rights of people infected with HIV from serving food, despite all of the evidence indicating HIV could not be spread this way. All of this occurred while the AIDS Quilt was displayed on the Mall right outside my 5th floor office window, so large that it spread from the Reflecting Pool near the Capitol to the Washington Monument. I could not escape the irony of it and despised this man for his hatred of gays. Some refer to him as the architect of the conservative movement that brought us, Donald Trump. Unfortunately, his amendment passed, but he was not able to prevent HIV positive individuals from being protected in the ADA, which was one of his missions that year. Though he is long gone, his racist and discriminatory views in the U.S. are stronger now than ever.

Today, I cannot imagine working on the Hill and feeling the fear that the legislators and their staff must now endure, some of them opting to wear bulletproof vests terrified that some of their own colleagues may have played a part in the insurrection and may still be a threat to their safety. In the last two weeks, I have recalled being in the Capitol many times. Hearing the stories of the staff members who barricaded themselves in an office and hid under a desk while rioters banged on doors calling for death to the Vice President and Speaker of the House brings chills down my spine and tears to my eyes. Not once did I ever feel that my life was at risk when I was in the Capitol. We all know how this happened, but unfortunately, we don’t have a magic wand that can reverse the spread of this hatred.

Time will certainly tell what the future holds for our country. For now, we can hope that the fair and secure election of Joe Biden and Kamala Harris and a Democratic Congress will help lead the way. The election proved that the people’s vote is what matters, and many turned out in record numbers to ensure that we can turn around the nightmare that was the Trump presidency.

Meanwhile, the U.S. Capitol is surrounded by chain link fences, concrete barricades, and thousands of armed police officers and military personnel in preparation for the Biden/Harris inauguration. Let’s hope this is enough to protect us, our leaders, and our democracy on January 20. After that, it’s up to us.